This is another game that I fondly remember as truly bizarre. Unlike Nemo, I can’t remember how it came into my life. My only real memories are a) I never finished it, b) a room in the game contains a giant spider who says “I AM DEAD”, and c) some sort of boss battle where the only way to win is to put down the controller, do nothing and wait for the enemy to die of boredom or some shit. Might as well jump in and see whether any of these dusty old recollections are accurate.

As expected, the introduction sets up a very strange story, full of awkward dialogue and classic grammar blunders. Mark, the protagonist, is a young boy walking home from a baseball game one bright and warm summer night. He spots a star in the sky, which “made his eye grow moist.  While he stared at it. The star got bigger and bigger.” (Haha! What a story, Mark!)

Those are actual excerpts, but I’ll get to the point – the star is actually a purple gargoyle-looking monster named… Bert. His planet is in trouble, and he needs Mark’s help in fighting the evil monsters that have taken over. Mark isn’t your usual adventure-thirsty hero. He doesn’t hesitate to tell Bert that he has no desire to travel to a distant planet to fight monsters. Bert further coaxes Mark, saying he shouldn’t be scared, as his “weapon”

is perfect for fighting the monsters. Again, Mark is quick to relay to Bert that he should perhaps put more effort into this savior search than “literally the first creature I saw”, by letting him know his perfect weapon is just an ordinary baseball bat. “Bat, batter, it makes no difference” Bert muses, and carries the boy away without further discussion. Before they arrive, Mark is told they will work together, and a crude 8 bit graphic depicts what appears to be Mark and Bert infusing together somehow. The game begins here.

The player’s mission is now to traverse over a variety of horrifying landscapes, fighting monsters that range from giant eyeballs with tentacles for legs, purple alligators, rabid scorpions and giant skeletons to fish with human legs, walking pairs of jeans (sans a torso of any kind), evil umbrellas and tiny sharks that wear giant dorsal fins as hats. Your only weapon is Mark’s bat, which can directly deal damage or swat away projectiles. Mark has a long life bar that can be filled if a defeated enemy decides to drop an energy boost, although this rarely happens. Some of these creepers may also drop a pill, which temporarily transforms you into Bert. In this form, you can fly and fire short range bursts. Don’t get too comfortable though; soon you’re turned back into innocent little Mark, swinging away at a planet’s worth of evil scum with nothing but a Louisville slugger. Basically, Bert would be the perfect candidate for saving his own oozing hellscape, if he wasn’t such a unmotivated, kidnapping crap-bag.

The enemies are funny enough, but the bosses are where things get beyond ridiculous. Each stage generally contains three of them. As you enter a room, the boss inside shouts a quick message in a speech bubble before it launches into an attack. My few vague memories of the game actually held up; there is indeed a spider that regretfully informs you that he is, in fact, dead.

You are immediately permitted to leave without a fight. One boss has three stages: he starts as a fried shrimp. Defeat him in this form and he turns into an onion ring. His final shapeshifting trick is to become a shish kabob. Other fun bosses include an evil pumpkin head who pleads “PLEASE DON’T PICK ON ME” before launching into his attack, a Minotaur who cries “Mooove it” before firing cows as his weapon and a punk-rock themed foe who wields the killer pun “TIME TO FACE THE MUSIC” before deadly notes are expelled from his guitar.

Before long, I came across some other familiar foes – a pair of zombies who demand you watch their dance. Do as they say, and they soon die. Attack them, and they will never disappear. Doing nothing is the only way to kill them. What a bunch of trolls game developers were.

In terms of difficulty, this game could have been a lot more agonizing than it is, at least in the first half. Patience is the key with this one. A majority of the time, you’re able to wait for the right opportunity to strike an enemy or pass an obstacle rather than rush through, and you’ll make it through whole stages unscathed. As both Mark and Bert, you’re able to crouch… well, more like laying completely flat on the grounf. From here, most enemy attacks are ineffective. You can even slowly crawl from this position. If you’re in Bert’s form, there are whole stages you can fly through, bypassing all danger. Once the magic wears off, you’ll turn back into Mark and plummet back to the silly horror carnival that makes up the setting for this game… but not if you know your way around taking advantage of faulty NES programming.

Memorizing which villains yield the transformation pill, and when, will let you remain as Bert as long as you need. This same trick can often be used for health powerups, but I found after abusing this trick a few times, they game caught on and the health stopped flowing.

About halfway through the game, the challenge ramps up.  Bosses have less predictable patterns and it becomes much harder to slay them without sacrificing a lot of health. Round 6 is true hell… The dreaded maze stage. These levels are always miserable in older games, largely because the repetitive backgrounds, limited colors and overall primitive design make them a nightmare to traverse. You’re attacked by a never ending hail of blue fireballs, rabid tables and chairs and a wind sound effect on loop that pierces your brain as you enter door after door after door, never knowing if you’re making progress toward the end or circling back to the beginning. My first failed attempt at the stage made me want to hang up the game forever… I knew as soon as I started again, I’d have the same amount of knowledge of where to go as the first try. 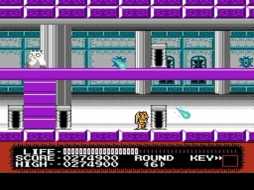 None. But I wandered on and on until I found the only boss of the stage, who thankfully granted the key. Several more attempts later, I managed to find the final door after receiving the key.

From here it was onto Round 7, which is essentially a tower. This is another telltale sign in old gaming…you’re reaching the end. The music grew even more foreboding, although this did not stop the tradition of ridiculous bosses (a caterpillar who says “MY NAME IS ROYCE”, who naturally uses a rolling attack). After beating only the second boss, I obtained the key. I stopped going through doors, flew to the top as Bert as fast as I could and finished the level pretty quickly. I read afterwards that this level contains a glitch, where if I was to fight all three bosses, I would not be able to exit the level. Classic Nintendo glitch: punish the player for completing all tasks.

The final stage had a pestering dragon boss who was by far the biggest annoyance. He tracks and follows you across the stage with AI you’d think was straight out of a current-gen game, knowing your moves before even you do. Your best bet is to just go toe-to-toe with him and trade blows until he dies; if you try to run and beat him strategically, he’ll kill you quickly (well, if you suck, like me). If you’re lucky, you’ll carry enough health with you to beat the other two mediocre bosses, and then it’s on to the final boss.

The last foe is a shrieking face who knows at this point in the game, you just want to be done with it: “YOU BEAT EVERYBODY! BEAT ME, AND YOU CAN LEAVE! COME AND

DIE!” Fighting him is annoying enough, and probably much harder if you’re Mark, reflecting his eyeball projectiles back at him. Instead, I made sure I was in Bert form, shot at him repeatedly and just hoped he’d die first. He did.

The ending seemed somewhat familiar. I may have skipped to the end of this one, possibly with an infinite energy code enabled. The story ends with Mark waking up in his bed; it was all a dream. These kids and their dreams, amirite? Or so it seems… Mark goes to his door to find Bert, who basically says, let’s go do that all over again.

Eh – fuck off, Bert. This game was enjoyable enough, and not overly frustrating, but not enough to jump right back in. The music was forgettable, which can be a deal breaker for me with these old games… Some of them have tunes so memorable, I’ll replay them for that factor alone. The gameplay was decent, but this game’s greatest strength was its bizarre humor with the bosses (which, actually, was pretty fucking great).