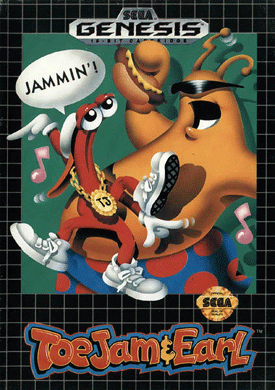 I was raised in a family with some serious brand-loyalty standards. That TV still functions after 10 years? Then it’s Sony or nothing for life. Buying a vehicle that isn’t a Toyota? Preposterous. That kid is still playing the NES, and it still works? Nintendo or bust.

So, no Sega Genesis for me. Not a complaint – SNES is what I wanted, and I’d still argue it’s the finest videogame console ever conceived. A couple friends and a cousin or two had a Genesis, and it was always refreshing to hang with them and toll away on some Sonic for a change. Other than that, there were really two HUGE selling points for me

when it came to the Genesis – one was Streets of Rage 2, and equally admired (or maybe even more so) was Toejam & Earl. This is a prime candidate for one of these nostalgia themed posts – why the hell was I so enamored with this game? And did it deserve all the praise?

To address the first question, I think it might be one of the earliest and greatest examples of couch co-op games ever. Sure, Streets of Rage can stand up to that praise as well, but Toejam & Earl was also profoundly unique. It almost suffers from that trademark Genesis “let’s be Nintendo, but hipper and cooler” vibe and aesthetic, but through some combination of self-awareness and self-deprecating, its lame attempt to be cool actually makes it… cool.

Changing the Mario Bros. formula wherever it can, and keeping parts of it where it needs, Toejam & Earl sheds the turn-taking process from most 2-player platformers and allows both of you to play at the same time, traversing a (literally) stacked world of 25 levels, collecting pieces of your spaceship so you can return to your home planet of Funkatron. Some levels contain ship pieces to track down and some don’t; a hint box will always let you know before the stage starts.

You’ll stroll over land, roads, sand, swim through water and fall screaming down pits as you search, collecting presents along the way and dodging Earthling enemies ranging from a squadron of chickens with a tomato bazooka, the boogeyman (who may provide the best audio sample in the entire Genesis library, and that is saying something because this game is full of gems) to a mad dentist (scratch what I just said; this guy wins that award). Presents provide mostly powerups such as a speed boost or wings, and a few ailments like your own personal thundercloud or instant death. Knowing which package contains what and when to use it is the key to victory here – stages start out fun and simple but become large and relentless later on in the game. (Also, unless you want a real challenge, choose “fixed” mode over “random” mode. The present that randomizes the rest of your presents in random mode is the kiss of death.)

A buddy of mine and I were looking for a fun way to burn some hours on my arcade cabinet, and I was determined to see how this aged…

And honestly? Pretty damn well. Chalk this one up as another game that was secretly made to be played on an arcade cabinet. The game is full of bright colors, is a blast to explore, contains consistent laughs, and although there are only a handful of different tracks, the music is fantastic. Working together or exploring separately makes the co-op fresh, fun and engaging. Controls are pretty simple and responsive; however, if you don’t have the right present when certain enemies are stalking you, you’re gonna meet an unavoidable death, which can feel cheap. The fun does start to wane a bit as the adventure slogs on; without a whole lot of variation, the later levels are basically more of the same, except with a much higher degree of difficulty.

Still, to this day it still makes for a fun and unique co-op experience, and definitely worth revisiting. And I feel like, in some strange way (albeit not necessarily a good way), a game that was developed in 1991 that allowed you to level up to “bro” status was ahead of its time. 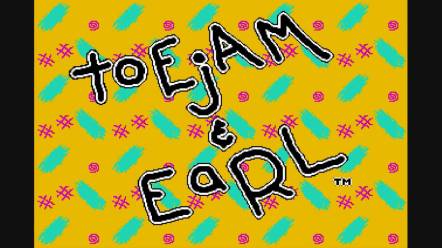 One thought on “Toejam & Earl”