Hot-Take ahead: Super Punch-Out!! is one of, without a doubt, the best games for the SNES. Seriously. In fact, when it comes to replay-ability, and we can remove longer, epic endeavors like FFVI, A Link to the Past, Chrono Trigger, etc., I think we’re talking Top 5. Maybe Top 3. It’s a game that has had unprecedented long-term replayability for me – like another beloved game of mine, Shadow of the Colossus, a game which also is little more than 16 sequential boss fights and not much else. And with the recent news that this epic title would be part of the SNES Classic Edition’s lineup, that tiny machine has become even more coveted. 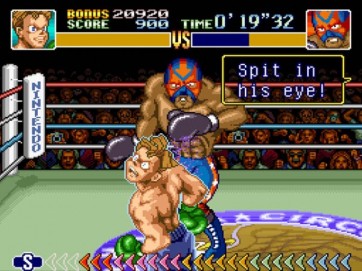 Oddly enough, after making an astronomical claim like that, I’m not going to go ahead and include one of my usual reasons why I love it; the music is forgettable, borderline crap, compared to its NES-brethren. Speaking of which, it pays terrible service to its predecessor: the protagonist is never actually referred to as “Little Mac”, Doc Louis is completely removed, there’s no semblance of a narrative in this go-around, and of that entire unforgettable cast of characters from the NES original, the developers apparently felt only Bald Bull, Mr. Sandman and Super Macho Man were worth salvaging for this entry. Seriously, you’re gonna pass over King Hippo for Mad Clown? Sacrilege.

In fairness, I will admit I recently discovered that this game is the spiritual successor to the TRUE original, the 1983 Punch-Out!! arcade. Although I was aware of its existence, I was not overly familiar with it; especially the fact that characters such as Bear Hugger appeared in it. It earns Super Punch-Out!! more cred in the legacy department, but let’s be straight here – Mike Tyson’s Punch-Out!! is the true original.

These points aside, though… The game is fantastic. It takes the simple-yet-brimming-with-strategy mechanics of the original Punch-Out!! and expands on them just enough to make the gameplay incredible.

The jist remain the same – head shots and body shots for each hand, but the super punches are much improved. Rather than picking up stars for strategic hits, your special meter will continually rise as you land punches. Once it’s full, you can unleash a haymaker or a volley of fast jabs. It doesn’t run out after an attack, either; only if the enemy lands a counter-hit will your special meter fall. This means if you can land your huge hits or time your fist-flurries around your enemies’ counters, you can use special attacks until you land a KO and end the match. The sound effects and animations from these hits are enormously satisfying, especially if you find yourself completely in tune with the enemy tells and make no mistakes.

The brilliant “boxing game but really a puzzle game” elements are still there, too.

Fighters who seem immune to a body shot, or appear to counter every punch you throw, just need a little patience and persistence for you to find the openings. Although there are only 16 cartoonish caricatures making up this colorful procession of lightly insensitive cultural tropes, the game has astounding replay value… First, you’ll shoot to beat each progressively difficult circuit of 4 fighters. Then, you’ll want to go back and finish them all without taking any losses. Finally, when you can confidently take down any of the boxers, you’ll want to hone each specific battle and find all of its individual shortcuts and secrets, nailing down the best time possible in the time attack mode. To acquire these best time scores, the game offers players however much depth they are willing to discover. The block button may keep you alive, but it adds precious fractions of a second to your score; you’ll most likely be able to find another workaround and forego blocking completely.

Lastly, let me just say this game is FANTASTIC to play on an arcade cabinet. Standing up at the machine, slapping the “start” button when you’ve reached the boss of a circuit, pounding the buttons when your special meter is full, a game whose “stages” last 3 minutes tops… it’s no wonder this game is based on the arcade original; it was meant to be played on an arcade machine. Over the years, I’ve beaten it many, many times. Part of its replay value comes from the fact that it’s not just about memorizing secret downfalls of the enemies and simply executing them; you need the skills to pull them off, too. Wait a year or so between playthroughs and at first, you won’t understand how you could even beat Rick Bruiser, let alone hit that amazing time record you once got. Spend a few hours with it once again, and the experience feels fresh and fun all over again. As I mentioned above, Shadow of the Colossus is another one of my favorite games ever, and I love the fact that the last 4 or 5 sentences of this paragraph could easily be applied to that title as well. Play it soon if you can, and consider your urgency to nab a Super Nintendo Classic elevated if you can’t.