I’ve eluded to this before, and with the game’s upcoming 20th anniversary, I felt there was no better time to expand on it – GoldenEye was, and will always be, one of my all time favorite gaming experiences.

This is no minor statement, coming from me – I’ve been playing games since the NES era, and have no shortage of love affairs with many games for many different reasons over the years. I need to replay Ocarina of Time/FFVI/Chrono Trigger fairly consistently. If not playing it through, I need to at least hear the Mega Man 2 soundtrack every couple of months. Occasionally, a current-gen game comes along that I can’t pull myself away from. All of these experiences are unique in their own ways, and GoldenEye is no exception.

I know this isn’t necessarily a hot-take, but it nevertheless gives me a chance to wax poetic about Christmas 1997, when I finally received this game. As someone who has always completely immersed myself into whatever subject I am currently interested in, GoldenEye was an exception. I was not (nor am I now) a James Bond fan. I’m not averse to it; it just never really grabbed me. I’m not sure what publications I was privy to at the age of 13 to know the gameplay for this game was far better than it had any reason to be, but I learned regardless. I rented it every chance I had, always praying my save file would be in tact, finding it wasn’t, and not caring at all that I had to start over. Obtaining my own copy, firing it up and seeing three blank save files, all for myself, is a feeling I still remember.
What the hell was it, exactly? I still don’t really know. FPS games had never really done anything for me before; but, in fairness, I didn’t really have an operational PC, so GoldenEye was a pretty outstanding gateway to the genre. Still, my relationship with them after the fact only strengthened the case that GoldenEye struck a unique cord with me – I played others, such as Halo and Modern Warfare, but never sank in even half the time or dedication to those that I did for Pierce Brosnan’s 64-bit adventure.
The gameplay was so satisfying – the shooting mechanics absolutely floored me. I played 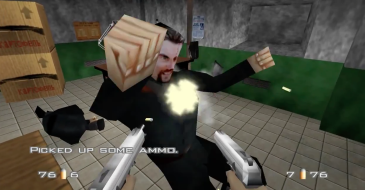 so much I had the sequential order of all the grunts and groans the enemy soldiers let out after being hit memorized (and probably still do to this day). Same with their death animations – I always knew who would enthusiastically turn 360 degrees before crashing onto the floor, and who would dramatically drop to his knees first. The level designs were varied and kept things fresh, whether you were prowling around the Facility, exploring the seemingly never-ending snow plains of Surface, saving hostages on the Frigate, or blasting your way to the front of the Train. I couldn’t get enough of the moody music of the expansive Surface, and the dramatic, ticking-time-bomb theme of the final Cradle stage.
The replay value of single player didn’t end there, either. After beating the game on Agent, Secret Agent and 00 Agent mode, unlocking all the cheats was the next feat to conquer. I don’t remember what was more fun – messing around with some of these cheats, or the thrill of unlocking them. I can’t remember many specifics, except for one; if I remember right, it was by far the hardest cheat to unlock. I won’t cheat and look it up on Google, but if memory serves me right, to unlock “invisibility”, the player needed to

beat the Facility, on Secret Agent mode, in under 1:05. (Okay, I looked it up after typing this – looks like it’s 1:20. Close!) Maybe I have my rose-tinted glasses on as I look back on this achievement, but I still contend to this day that it was one of the most difficult gaming challenges I ever completed. Part of it was luck – one objective required Bond to converse with a certain scientist, who was randomly placed in one of three rooms. If I remember right, he HAD to be in a certain room to make this time possible – if not, you had to restart. On top of this, you needed to master the c-button controls – every step you took had to be maximizing the potential of this control scheme. The heavy, slow moving metal doors had to be triggered open as early as possible… this minimized the time you had to wait before you could slip in. Add to this precision headshots and flawless remote mine placement while enduring 006’s dialogue, and you have a cheat that forgives absolutely no errors in order to achieve. Once I unlocked all of these on my own cart, I would look for any excuse to keep going. I would open the cheat menu on my friends’ carts to find the pathetic pair of “paintball mode” and “DK mode” only – an invitation to grant them more, even if they didn’t care. 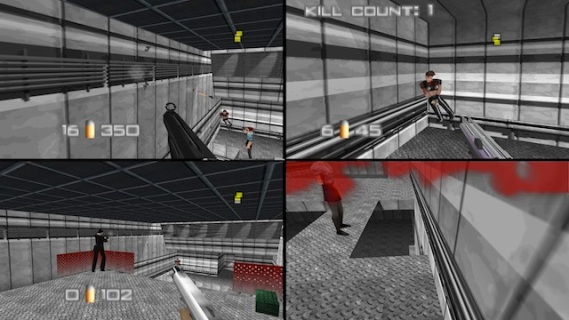 And of course, I’d be remiss if I didn’t mention the multiplayer mode. For anyone that played this in its heyday, who DOESN’T have the warmest memories of this mode? So many options, stages, weapons and characters. For the longest time, whenever I found myself in a room with three other people, my default thought was always “…we could get 4-player GoldenEye going right now.” Three player would suffice in a pinch, but I never found a lot of use for head-to-head two player. Screen looking was a default part of life in these days – it was basically impossible not to do, and anyone claiming to abstain from it 100% was a liar. 2-player was the act of watching the other player’s half of the screen while keeping half an eye on your own.
For my friends and I, our go-to mode was Remote Mines in the Facility. We would dip into Man with the Golden Gun, or Automatics in the Stack, but it always came back to Remotes in the Facility. I will never claim to be better at a game than I actually am on this blog – read any of these posts, and you’ll find a lot of self-deprecating confessions on how I struggle, more often than not. Having said that, I owned this mode. I would take on my friends 1-vs-3 and come out on top by a landslide. It became clear, after some time, that no one was prioritizing GoldenEye in their life like I was, and it was time to move on. I begrudgingly let it go – to this day, I still don’t remember getting sick of it – the day just came when all the single player challenges had been exhausted, and everyone had moved on to other games. A sad day, indeed.
I’ve tried to revisit it, and although all the memories are still there to provide a loving look back, anything more than a couple campaign levels and a match of multiplayer or two has yet to stick. I’m not sure why – sure the graphics are ugly as hell, but I’ve always been able to put in perspective the era a certain game hails from. Same for the controls – they’ve aged horrible in the era of dual control sticks, but I’ll always remember the days when they were second nature. I entered a novelty tournament back in college and was thrilled to see the instincts were still there – I “won”, and was “allowed” to play the organizer of the event, just for fun. After beating him, he demanded one more match, 2v2. I recruited a skittish friend who, while a complete master at Halo 2 at the time, had little memory left of how to function in the wonky, polygonal world of British secret agents. Still, we almost made it, until the event organizer and his teammate chose the tactic of guarding the body armor in the Basement, each toting a RCP-90. Check-mate, sir – you win this time.
Come meet me in the Facility.