Ah, Junkrat. My first favorite hero. The one that, while reading many reviews, sold me on giving Overwatch a shot at all, just because he sounded so fun. The personality, the playstyle, the voice lines… what’s not to love? My relationships with all of the heroes of Overwatch have undergone many changes over the past year, but aesthetically, Junkrat probably remains my favorite.

And I do still love using him, but our kinship has had a bumpy road. On the surface, what’s not to love? He wields a grenade launcher, capable of doling out immense levels of damage; in fact, although he is specifically classified as a “defense” hero, often times the Junkrat in the match will take home the gold medal for damage dealt. He can lay traps, hurl mines that can both detonate in the faces of enemies instantly (reminiscent of my favorite GoldenEye weapon, the remote mine) or provide mobility advantages as he propels himself over walls, and his ultimate, the superbomb RipTire, sends enemies cowering for cover as soon as it makes itself known. Honestly, select him on the character screen, watch his animation and try not to fall in love. A maniacal laugh, followed by a devious look slowly shifts into a… blank, confused, aimless stare. It says everything about him in about 4 seconds. 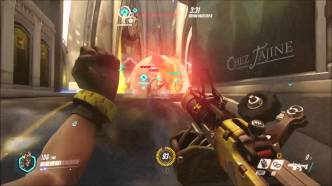 Still, despite all that, there have been a few instances I have turned my back on my beloved pyrotechnic-fetishizing Aussie. For one, Junkrat doesn’t always garner a lot of respect. I can’t speak for the broader circles, but I’ve heard accusations that he takes little skill, and is nothing more than a hero who can stand safely behind teammates and launch grenades non-stop in a pray-n-spray fashion. I don’t agree with these assessments; I think a skilled Junkrat player, when they find themselves in a closed-off space with an enemy offense hero, is more than capable of pulling off some quick geometry and ensuring a grenade or two will bounce into the face of their adversary. On the flipside, I have found myself in matches where my teammates are groaning for me to switch, insisting that the damage I am dealing is inconsequential, and doing nothing more than charging the ultimates of my enemies. For sure, whenever I pick Junkrat in a competitive match (and I never “insta-lock” him, that is to say, pick him as fast as possible without any regard to the team composition), I can already imagine my teammates rolling their eyes, whether it’s actually happening or not.

And that really shouldn’t be an issue, but sadly it can be. A bad experience or two is sometimes enough to sour me on a character… I have a hard time shrugging it off, or at least feel like the pressure is now higher to perform and prove my pick. Regardless, I have phases where I have a “haters-be-damned” attitude and pick him anyway. The majority of the time, I have an absolute blast.

But, that leads us to the CURRENT Junkrat issue. As of a month or so ago, I had jumped 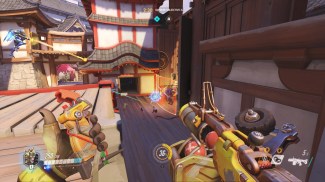 back on the Junkrat train. I was having a blast with him consistently, remembering why I gravitated toward him in the beginning.

And then came: the buff.

Possibly for some of the reasons I mentioned above, Junkrat pickrates were on the lower end, and as the Overwatch development team has proved time and time again this past year, they are not afraid to patch a character to increase their viability. I love this philosophy, but don’t think it’s always completely necessary. In Junkrat’s case, he had received the buff he REALLY needed probably 6 months or so ago: an inability to be damaged by his own grenades. Removing this detriment allowed Junkrat to engage in up close and person encounters without fear of killing himself while protecting himself. 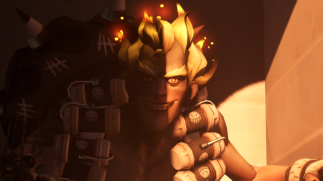 THIS time, however, he was given a second concussion mine. Previously, you could lay only one mine at a time – whether you used it to launch yourself to higher ground, lay a trap or toss at an incoming enemy, you needed to wait for the cooldown period to pass before you could use another. Now, you can use two before the cooldown takes place. It may not sound like much, but it gives Junkrat a significant edge. I wouldn’t go as far to say it makes him overpowered, but it’s enough that there is now a Junkrat infestation in Overwatch. He’s everywhere. This means he’s often picked before you can select him, and even if not, he lost that bit of exclusivity I loved about him. “Oh, ANOTHER Junkrat main,” teammates now groan.

Still, these are really all my own issues to work through. Soon enough, the next hero will drop, or receive an overhaul that will shadow my buddy Junkrat (update: that’s happening now, with Mercy and D.Va, and I am very much guilty of lining up and playing my part in the Mercy over-saturation).

Whatever the case, I’ll always have a soft spot for him. I love his lore, and I love the new map he can call home along with BFF Roadhog that just dropped. Whenever I’m in one of those “who do I want to beeeee thoooooough” moods, I will always default to my buddy Junkrat, who will take me back to the reasons I fell in love with this game in the first place.

7 thoughts on “Why I Love: Junkrat”